Happy Mothers Day and a Tribute to My Matriarchal Role Models

Recently I was going through some old family photos and was inspired to reflect on the matriarchal side of my family in honor of Mother's Day.  I thought I would write a bit about memories I have of these special women who have influenced my life.  As of today I can say as far as I am aware I am the oldest living female on this family tree branch.   (disclaimer-I am only referring to relatives with direct bloodlines to me). 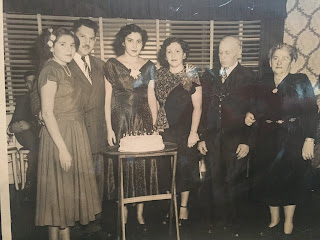 My great grandmother Rachel came to this country with my grandmother Sara, who was her only child in the early 1920's to escape the pogroms in Kiev.  Sara was born in 1912.  Rachel's husband, Peter Piltch came several years ahead to set up life in the states and be able to sponsor them.  Legend has it that my grandmother and great-grandmother had to hide in the forest with aid of a non-Jewish family until they could escape to the U.S. once they received money to travel. They both entered the country through Ellis Island and to commemorate this we have a plaque dedicated to Rachel.  Rachel lived to be over 100 years old and received a letter from President Gerald Ford when she reached this milestone.

Sara was an only child and married my Grandfather, Al Ring also known as Abraham, who was born in 1911.  Al fell in love with Sara after seeing her photo and they were married at a young age.  They had two daughters, my Aunt Elaine Ring(Wolpe) and my Mom, Audrey Ring (Stearns).  My grandparents were very forward thinking and my Mom said they were always the role model family influencing choices their friends would make.  For example, my grandparents were one of the first to buy a television set but once they did my Mom's friends family's followed. Sara was pretty liberal, unusual for her generation, and allowed her daughters as first generation Americans to live assimilated and modern American lifestyles.   They were encouraged to go to college and have careers.  They both became independent thinkers and amazing women in their own rights while building beautiful families.

As a child I was extremely close with my Grandmother and Great-grandmother.  I would spend weekends at their house in Cambridge where Rachel lived with Al and Sarah until she was close to her late 90s and then had to move to the Hebrew Rehabilitation Center in Roslindale.   Rachel was very sharp and warned me about boys before I left for college.  She told me to watch out for the ones who said they wanted to come back to my room to study.  She said they may really want to do more than study.  She was in her 90s at the time of this advise but knew what was going on.


My grandmother Sara was very involved in B'nai B'rith and other civic organizations. I always remember seeing T'zdakah boxes around her house to raise money for charity.  In fact I have kept and still use one of her boxes today to donate. Both she and Rachel were very progressive for their ages and adapted well to American life.

Sara was a great cook and baker.  Although she brought many  recipes from her homeland she mastered the all American dessert and made the BEST apple pie I ever tasted.  To this day I am  in search of one that is comparable but so far have not had much luck.    (I have even tried to recreate it using her rolling pin and recipe).

My Aunt had four boys and my Mom, a girl (me) and a son.  Since my Aunt never had a girl, she treated me as her surrogate daughter whenever she came to visit our family from Philadelphia.  She  taught me many of the finer things in life including a love of reading, cooking, travel, jewelry,  bargain hunting for designer clothing,  and enjoying casino visits.  She was also very involved in local civic organizations and had a voice to be listened too. In many ways she was a large role model and influence on many of the things I enjoy today.

My Mom was an amazing person and role model.  She lived a less exotic lifestyle than her sister, was very civic minded and enjoyed the basics of life.  She was always happy and  instilled in me the love of volunteering and helping people.  As such, she was very involved in Humanitarian and Educational organizations throughout my young life and continued this with when she moved to Florida in the early 2000's. She worked as an educator when we were young, was an entrepreneur with my Dad starting a few different business ventures and was always involved in local Jewish life.  My Dad also described her as "the eternal optimist" and a "woman of valor".  Towards the end of my Dad's life she became his primary caretaker and did everything to make his last years comfortable. At the end of her life she did her best to be independent and take care of herself as well.  As her health succumbed to Pancreatic Cancer she was stellar and became a role model of how to be positive and in full control.  She taught me a lot as I became her primary care taker in her final days.

We are now onto the next generation and my three kids have grown up and fled the nest.   As we celebrate Mother's Day it is a joy to remember the achievements and roles those who came before me played in my life and to see the influence they have played in raising my own family.  I am very proud of the persons each of my kids have become.   Perhaps sometime in the future, they will become parents and then I would be able to share more on this common journey we all share of Motherhood.  Wishing all my readers a Happy Mother's Day.

Wendy is a realtor with Coldwell Banker Needham.  She loves to read, blog, walk her dog Delilah, cook and travel.  She looks forward to spending vacation time with her family, who are all dispersed from her nest as the summer approaches and will share some special photos on Instagram.
Posted by theLokal1 at 7:41 PM

Get Organized! And 6 More Ways to Make the Most of This Weekend

theLokal1
I love to meet, greet and help people. Networking and finding new connections intrigue me and I am always thinking about how I can connect people and ideas.